Bioregulatory Systems Medicine embraces the complexity of the biological networks in treating disease.

The complexity of dynamic biological systems offers critical insight into the behavior and properties of biological information flow and regulation. Biological networks are inherently dynamic and unstable; their capability to adapt against constantly changing internal and external inputs is defined and dictated by their robustness. Network robustness refers to the idea that networks absorb inputs from their environments, which induce numerous regulatory response actions simultaneously in order to maintain a state of dynamic equilibrium. A system is considered robust if it maintains function regardless of what steady state or condition it is in.

There are the two major types of biological information:

Sequence information is encoded by 4-digit nucleotide code in DNA and determines the structural and functional specifics of proteins and RNA molecules that constitute molecular machineries.

Regulatory network information is revealed in the form of specific interconnected, predictable interactions among different proteins, other molecules, and DNA regulatory elements that describe how molecular machineries behave in one or another cellular state. In this sense, regulatory network information connects different levels of biological structure, from molecules to cells, cells to tissues, and tissues to organs and organ systems.

It is hypothesized that disease occurs when accumulated stresses overpower autoregulating abilities that support the robustness of tissue molecular networks, causing tissues to dysfunction and in turn distort molecular information flow. Since tissues and organs are linked together in networks by functional interdependencies, distortions of information flow can propagate across the network, gradually resulting in disease progression. 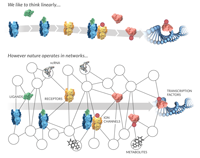 The fields of molecular biology and medicine have traditionally considered influence and causality among relevant entities as occurring in a linear manner. This linear framework, often referred to as a reductionist perspective, supports a single-molecule, single-target approach, whereby a particular biological component (e.g., receptor, gene, etc.) is considered individually and in isolation when treating disease. More recently, modern technological advances have allowed for more comprehensive understanding of fundamental interconnectedness of biological systems, prompting a re-conceptualization toward a non-linear, systems-based model of physiology and pathophysiology. This integrative view acknowledges the spatial and temporal interdependencies among multiple molecular and physiological processes, maintaining that a more effective medical approach utilizes biological networks when treating disease.